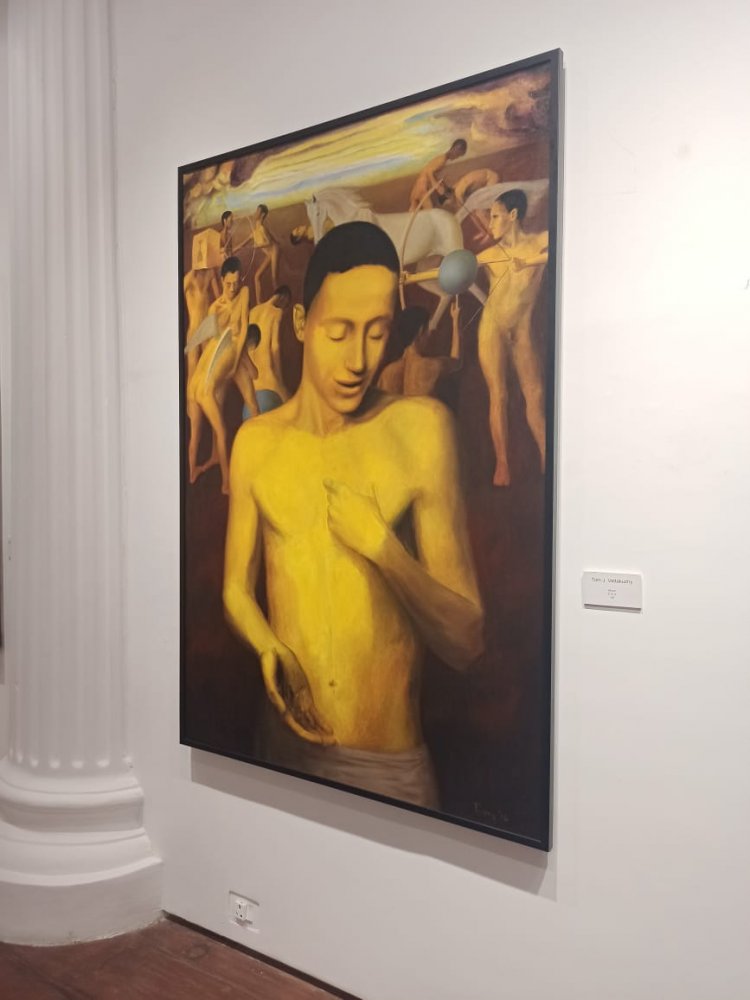 For the past couple of years, Artist Suresh T R has been ardently trying to find a solution to remove fungus and mold from oil paintings and restore them in the process. His long journey has come to an end, thereby transforming him from an artist to a successful art restorer. He, with the help of K G Vinodkumar, General Manager (QA and R&D) of Kochi-based Nice Chemicals, has successfully created a gel-based reagent that removes fungus from oil paintings. After spending more than two years in the lab, the two have contrived a special reagent that helps in removing as well as the prevention of fungus on oil paintings.

Suresh is a self-taught artist and has been practicing art over the past three decades. Though he initially used to create oil paintings, he eventually moved onto other media as he faced challenges in preserving his paintings. It is this dilemma that made him seek a solution to it.

“It is a real struggle for artists who do oil paintings when it comes to preserving them. This is especially true in humid conditions, where fungus and mold can grow faster on the paintings. Hence, a number of artists migrate to other media such as acrylics,” says Suresh.

In order to fully understand the problem, Suresh even built a mini-lab in his home. He built a high humidity chamber at home where he placed different paintings to observe the decay in each painting. Suresh explains,“There are various factors that can affect the preservation of a painting such as environmental factors, the ratio of diluting agents in the paint, the methodology behind application of paint and the colours used. All these contribute to the formation of mold or fungus. Since these factors vary in each painting, I had to first understand the science of the painting and then think of a solution to restore it.”

As oil paintings can take a long time to dry, it is susceptible to dust, scratches and dirt. Moisture and humid temperature can lead to mold and fungus formation on the painting. After finishing a painting, artists usually apply a coat of varnish which not only prevents dust from settling on the painting, but it also saturates the colours and gives the painting a vibrant look. However, this does not help prevent mold or fungus from growing on the painting.

“An oil painting takes a long time, even up to 500 years, to completely dry. It really is a challenge to preserve it. I feel any small attempt in preservation and restoration can encourage artists to return to this medium,” says Suresh. “It can also benefit curators, galleries, art institutions and museums,” he adds.

The reagent Suresh has formulated has two parts — one that cleans the canvas affected by fungus and the other can be used in the pretreatment of the canvas that helps in the prevention of fungus.

It is with this reagent that Suresh was able to restore Tom Vatakuzhy’s oil paintings that were almost completely destroyed by fungus. They were then exhibited in Durbar Hall Art Gallery this year in January. He has since been getting enquiries from artists and he has started restoring more oil paintings in his studio on Sahodaran Ayappan Road.

Victoria Designs - an elegant solution to your designs...